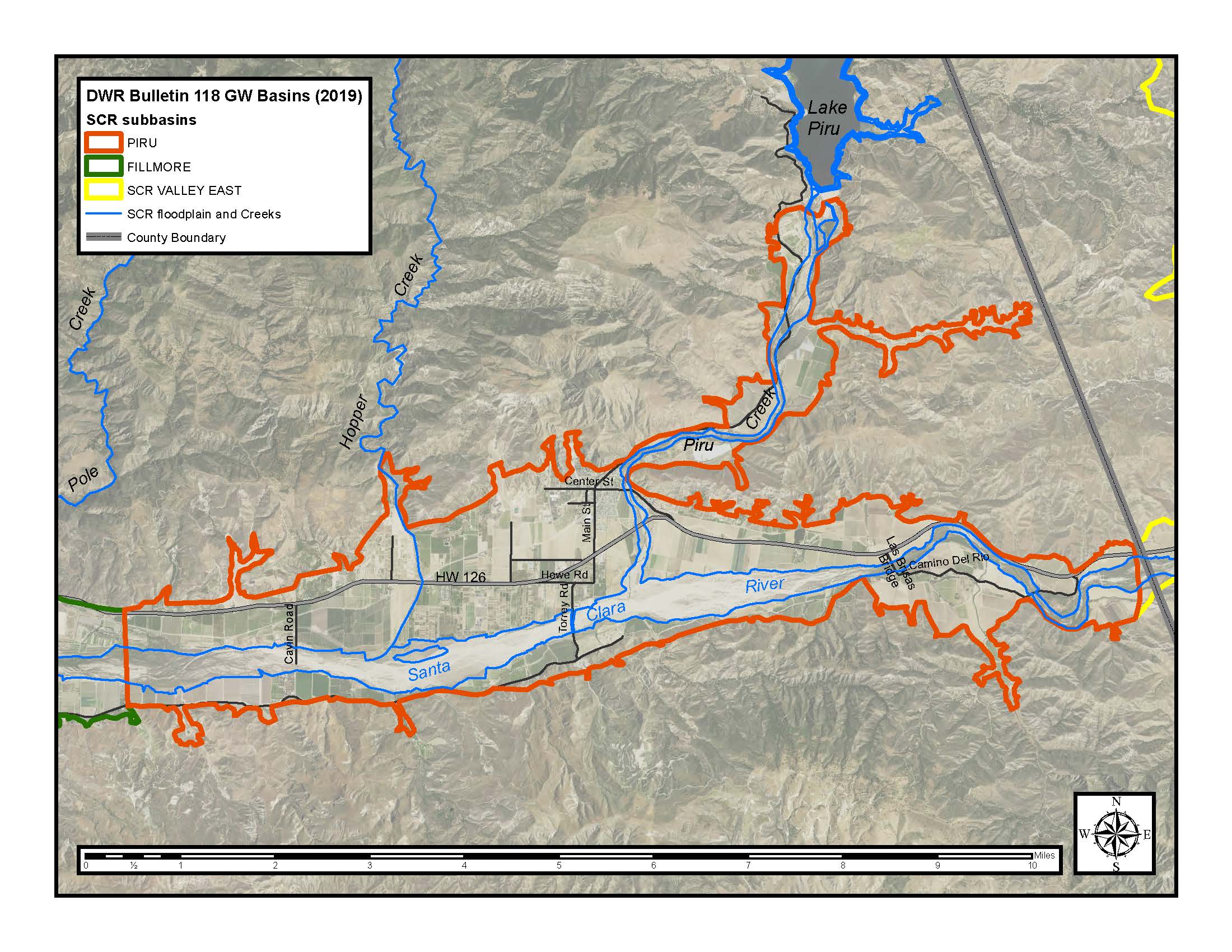 The eastern boundary of the Piru basin is less than 1,000 feet west of the Ventura/Los Angeles County Line.  The western boundary of the Piru basin is located approximately two miles upstream of the City of Fillmore upstream of the Fillmore Fish Hatchery.  The topographic narrows in this vicinity result in a gaining reach of the Santa Clara River.  The Piru groundwater basin covers a surface area of approximately 8,900 acres.

Piru basin average (mean) and median water year precipitation from 1950 to 2015 was 20.01 inches and 17.08 inches respectively, as recorded at the Piru-Temescal Guard Station at Lake Piru (Ventura County station 160).  Average annual groundwater extractions for Piru basin from 1980 through 2015 were approximately 12,400 acre-feet.

The San Pedro Formation is folded into a syncline with an east-west oriented axis and underlies the older alluvium, except at the east end of the basin where the older alluvium is underlain by impermeable Pico formation. The San Pedro formation consists primarily of permeable sand and gravel and can extend to a depth of approximately 8,800 feet, as interpreted from oil well electrical logs (Mann, 1959).  The depth from which groundwater production is suitable for agricultural and urban use and can be reasonably extracted is however considerably shallower than 8,800 feet.  Few water wells deeper than 700 feet exist in the Piru basin.

Three principal faults bound the Piru basin: the Oak Ridge fault to the south, and the San Cayetano and Camulos faults to the north.

Groundwater flow in the alluvium of the Piru basin tends to be westerly, parallel to the river channel.  Similarly, groundwater flow in the San Pedro formation is generally westerly with a small northerly and southerly components.  Clay layers have been identified at some locations within the basin but are not thought to be continuous.  The basin is considered to be an unconfined groundwater basin.

The reach of the Santa Clara River within the topographic narrows located about one mile upstream from the City of Fillmore (and near the Fillmore Fish Hatchery) displays perennial rising groundwater (a gaining stream reach) in all but the very driest of years.  The gaining stream reach extends upstream to the vicinity of Hopper Creek when the Piru basin is full and contracts downstream towards the Fillmore Fish Hatchery in Fillmore basin as water levels fall within in the basin.